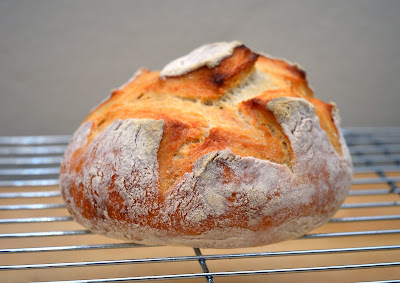 I've been really unhappy with store-bought bread and it's sometimes hard to find brands that are 100 percent vegan. I've been seeing a lot about no-knead breads lately, so I thought that I would give it a try, but never got around to it last year. Then I was researching a couple of cookbooks to give to my boyfriend's sister for Christmas. One of them was Artisan Bread in Five Minutes a Day: The Discovery That Revolutionizes Home Baking.

I decided to go with a different book for her, but was still intrigued by this book. I mean, hell, if I added up all the time I spend looking at the list of ingredients on bread packaging at the store, it could easily add up to more than five minutes a day. I roamed around the Interwebs and found several links to the "master boule" recipe (including this one at Mother Earth News and this one with videos at Instructables) and it seemed easy enough. The steps are basically:

And it may seem complicated, but compared to kneaded dough, it's really not. Once you do that first part, you've got four or five little loaves before you do those first steps again. Then, once you get the hang of the order of the last steps, it's super simple. And you don't even have to clean the container when you make a new batch. It kind of gets all sourdoughy if you don't. Even if you don't make bread every day, the dough is good for two weeks. After that, it won't rise so well.

Other thoughts regarding this method:

thinking that if all goes awry, I still have a container to store cereal or something. It has a little flap on the top for you to pour stuff, so I just leave that part unsnapped so gases can escape. When I was at the store, I looked at all sorts of other containers, but decided that I wanted something tall that could fit on the top shelf of the fridge and not take up a lot of other real estate in there.

The part about making the slits in the bread is imperative. Otherwise you get a hard log that you need an axe to cut through. The slits help the bread expand in the oven. That's where it will do most of its expanding, by the way, so don't be alarmed when your bread has been sitting on the peel for 40 minutes and hasn't done much of anything.

I used a wooden spoon to mix the dough. It's really wet and the spoon worked, but as I read about people making bread this way, I came across this utensil that is called a Danish Dough Whisk

and this one is now on its way to my house because I am a kitchen gadget whore.

I have not read the entire book, in fact, I have only made this one recipe and checked out some other bits on the authors' blog. There are a couple other books from them, too. One has 100 more recipes and one is about pizzas and flatbreads. My library has all three, so being the library girl that I am, I'm going to check them out and see if they're worth adding to my permanent collection. I'm aware, too, that some of the recipes are not vegan (egg, milk, etc. are common bread ingredients, especially for sweeter breads) so maybe I can make some modifications to make them vegan and talk about them here.

Speaking of library girledness, I apologize for the time away from the blog. The last few semesters I have been in school and working on my internship at a library. Two of those semesters I was taking 18-hours (plus home schooling my high-schooler) so I didn't find much free time for writing and really, cooking took a back seat, too. I just found I was so tired I didn't care and we ate tofu scrambles about twice a week and canned beans quite a lot. Nothing too exciting there, but luckily we're past that and I now have this to show for it: 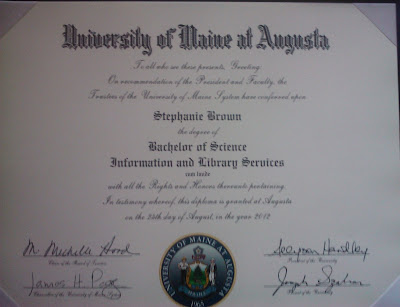