Dear Starbucks: Soy Shouldn't Even Be a Reward

Because it should just be free. Period. Every other coffee place around me offers that to their customers, so if Starbucks would like the loyalty of the folks who either choose soy for personal reasons (taste, less saturated fat, vegans) or out of necessity (dairy allergy, lactose intolerance) then they should change this policy. Some places even offer almond milk and rice milk for free so what gives?

I hadn't actually been going to a Starbucks store for a while but we did purchase their House Blend from Costco quite often. It tasted good and was Fair Trade and was reasonably priced. Coffee can do a little bit of a number on my stomach, however, and my significant other likes his very strong. We do pour-over coffee each morning so that we both get it just to our tastes. Starbucks recently introduced some "Blonde" varieties and that was really the ticket for me. I had no problems with it at all and loved the lighter, smoother taste. I didn't want to buy the gigantic bag at Costco, however, because I only use one small scoop each day (whereas he uses 3 scoops each day!). I like it to be fresh and so needed to buy a smaller quantity at a time.

Enter the Starbucks Reward Card. Yay! It had two free perks I loved: A free cup of coffee for every pound of beans and free soy milk every time you buy coffee. That's great for me, because they usually charge $.60 per cup for that. Significant other is lactose intolerant, so that's $1.20 every time.

Starbucks likes feedback, so I gave them mine and others who are disappointed about the changes are also letting them know. Hopefully they will make some changes in this area that make everyone happy. I left the following comment on their blog to let them know how I feel about the issue.

I really enjoyed the perk of getting a free cup of coffee every time I bought beans even though it was a little bit pricier than beans elsewhere. It was truly a reward. It was a little time for me to just enjoy coffee that I didn't get up at the crack of dawn to make. With that gone, I will just buy beans at Costco. Their Seattle Mountain Blend is pretty good. I see that they are carrying your Veranda lately, but I don't know if I will buy that because I'm feeling a little slighted over this whole reward thing.

I never used the syrups (though the comments here indicate a whole lot of folks love them) but I did enjoy the soy milk reward. I am vegan and my significant other is lactose intolerant. Other coffee shops near us don't charge extra for soy so having this card was what kept me coming to your store instead of theirs. I would love to stay loyal to Starbucks, however, I don't feel that punishing me for wanting / needing soy milk is the way to go. (Especially to the tune of $1.20 every time - where on earth are you buying your soy milk that you feel you need to charge me *that* much?)

I could have lived with the free drink with beans going away, because like I said, that was a BONUS feature. A reward. Something special. You could shuffle those rewards around any way you like and it wouldn't bother me too much. I'd adjust. It was just something that really made me feel that there was some value added to that bean purchase. But free soy milk should not be a BONUS feature. You shouldn't even have to have a card for it. It should just be a given. If you're not going to offer that, you could at least, perhaps, offer an array of reward choices and when people are already online registering their cards for the reward program, they could then make choices about which rewards (within a set limit) they could attach to their card. It could be individualized and customers could choose the rewards that mean the most to them. You know, here are six options, choose the three you love most.

At any rate, I've cancelled my auto reload on the card and won't be coming here any longer once my balance is used. I understand that you have to make choices about these things. You're a business. I get it. But I'm a customer and I have to make choices, too. So, there's mine. I'm just offering this explanation to you since you made these choices based on customer feedback and because you said you are excited about offering flexibility. My feedback is that this doesn't feel very flexible to me. For what it's worth, I think the free food idea is stellar. However, given a choice, I would still rather have free soy milk.

There is also a petition where I left the same message and added to the other voices there.

I know that for some, this is not a big deal because they use independent shops or make coffee at home. We do that, too. Still, in principle, I'd like to see soy milk offered there for free. And not just for vegans. Some people don't have a choice about cow's milk. They just can't drink it at all.

All this has motivated me to stop being so slack, however, and to make a more concerted effort to stop by Avoca Coffee when I'm in the neighborhood, or hell, to make the effort to get over to that area more often. They don't charge for soy milk, they changed their mocha recipe recently to make it vegan, they offer locally baked vegan delights from Stir Crazy Baked Goods (which also offered om nom noms at my CSA) and they've got vegan bagels from Boopa's Bagel Deli. Can't get that at Starbucks. On top of that, they often have food trucks nearby that have vegan food.

Why the hell am I going to Starbucks, again? 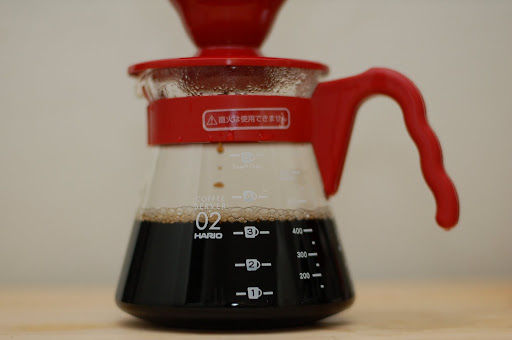 In other coffee news, the Hario carafe was shattered after a slippery hand incident. A cup fell out of significant other's wet hand while he was doing dishes and the cup landed on old Hario. RIP. You were a good little carafe and I will still use your cone filter top in remembrance.