So, you know how they say that your tastes change when you go vegan? Well, they do. Dr. Neal Barnard is always comparing it to the switch from whole milk to skim milk. After you've been drinking the skim milk for a few weeks, you get hold of some whole milk and it's practically like drinking cream. So it goes when you go vegan. At first you might miss the meat and feel like something is missing from everything you eat. You might not feel as satiated. But then, after some time passes that feeling lessens. You find yourself surprised by the simple flavors of a ripe tomato or the crunch of an almond. You feel full after eating a bowl of brown rice and veggies. You wonder just how long those oats are going to stick around because it's two hours past lunch time and you're still not hungry.

If you've already been reducing your intake of meat for a while, this change happens pretty quickly. If you haven't, it takes about 3 weeks to a month. If you're still having a lot of "relapses" into cheese and bacon, then it might not come at all until you've been able to go a while without those things.

For me, I'm past that now that it's been over a year. My biggest stress is eating away from home, really, and I just need to learn to manage that better. There is, however, this other issue that has been cropping up again and again for me. At first, eating a lot of fruits and veggies was really rewarding because so much of my diet had been meat / milk / eggs / cheese. I couldn't believe how good I felt each time I removed one of those things and replaced it with something plant-based. That was reward in itself. But now, the wall I'm hitting is taste related. It's variety related. I feel like there's something missing again, but this time it's not meat or dairy. It's something about the actual tomato I'm eating. It's something about the garlic.

The food I'm eating isn't as flavorful as it should be or the flavor is always the same. I've been eating the same hydroponic tomatoes from Costco for years. They are not terrible tomatoes really, but when I see a picture like this or this or this... Something inside me moves. My mouth waters and I feel such a strong pull to those gnarly jokers. Then I go eat a tomato from my kitchen and it leaves me wanting.

When I went to Super H Mart, I saw all these amazing things... Water caltrops, jackfruit, daikon radish, bitter melon and things I can't even remember now. When I see something like this purple cauliflower, I want to eat it. Desperately. And then I go eat the cauliflower from the grocery store and something about it is not completely satisfying to me any more. Maybe it's the taste. Maybe it's the sensory experience. Maybe it's that I need more purple stuff in my life. I have been severely drawn to blue potatoes, red onions, purple green beans and beets lately. Maybe my body is saying eat some damn anthocyanins already! But whatever it's saying, the food I've been getting at the store just isn't doing it for me.

So, I joined a CSA. I've been looking for a good one for a while. My friend Terri was part of one for a while but she didn't really like it. A lot of the ones around here are kind of (for lack of a better word) fake. They're not really CSAs, but more like a co-op, except one where the members don't make many choices. They are in the "style" of a CSA or are "like" a farmer's market. I don't really want to be part of something that is really just a couple of people rounding up vegetables from all over the world and not really knowing where they came from. If you're just sticking the same blackberries in my box as they have at Aldi and charging me quadruple the cost for the pleasure, that's not what I want. I can appreciate an avocado in my box, but if figs will grow here I don't want figs from California and I sure don't want them from Greece.

What I want is to know who my farmer is. I want someone who will bring me new, delicious things. I want someone who can talk to me about what I'm getting beyond what the stocker at the grocery store can tell me. (Hell, sometimes I have to tell *them* what I'm looking for. "Yes, I know that's cabbage over there but what I'm looking for is Napa cabbage...") I want to stare into that box and see surprises. I want to pull something out and be challenged by it and I want to go searching for the ways other people have prepared that thing. I want to hold a tomato in my hand that begs me to eat it like an apple. I want to feel what it's like to eat something at the peak of its season. Hell, I want to get my brain out of this time warp that doesn't even know what foods are in season in the first damn place.

That may be a tall order, but I'm hopeful that my farmer can handle it. I think she can (and then some). So, bring on the rain and hold back the frost, because she's got a job to do! Her name is Beverly Thomas of Cold Springs Farm:

In other news, things in my own garden are shaping up. Peppers have gone crazy and tomatoes are trying to make a come-back. Even the basil is going along with this "second spring" effect here in Texas. I'll take what I can get because I know a cold front is on the way. 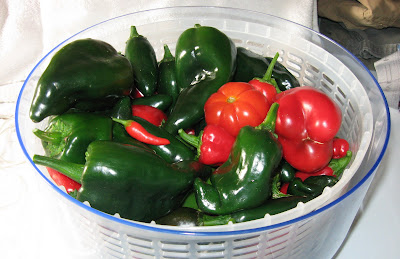