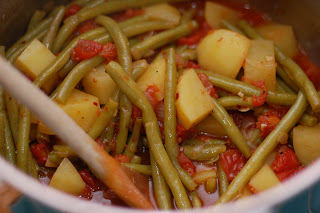 Greek restaurants are always a great choice for vegans and for those times when you're eating with omnis. There's a little something for everyone. Hummus, baba ghanoush, pita bread and great salads (just watch out for the feta) are available at the very least and lots of times there are vegetable dishes that require little to no changes to be vegan. I was impressed enough with the hummus and whatnot, but what really had my mouth watering was the fasolakia or green beans. These had potato and tomatoes and were just so tender and flavorful. I decided to try to make some in my newly christened pressure cooker.

So yum! The second time I made this I added twice as much sliced garlic and threw some whole cloves in as well. We like garlic a lot, though, so keep that in mind if you adjust that. I've had this before where the onions weren't chopped and were just rings or long strips. That would save time at the cutting board. I just chopped them because the man-people in the house don't like their onions that way. They like the flavor of onion but not the large, sliminess of them.

You cold also make this in something other than the pressure cooker like a big soup pot or enameled dutch oven. Same basic directions but I think it would take about 45 minutes to an hour of simmering in a covered pot.