Did you know that the Martha Stewart food site has a collection of vegan recipes? So pretty! How does that woman do it? I say woman like she is back there doing it all single-handed, but still.

I have been on a serious zucchini kick lately and am going to miss this stuff so much when it's all gone. It's really the only part of summer that I'm clinging to for dear life. You can take your 110+ degree days and stuff them where the sun literally does not shine, but let me have some more of that zucchini! I have a friend who is about to harvest some eggplant, though, so maybe that will be a good transition away from summer and into the winter squashes. And then before you know it I will be pining for butternut squash.

I made this recipe for Vegan Potato, Zucchini and Tomato Gratin and it was so incredibly easy and delicious. I made two. Hers looks super fancy in her gratin pan and all, but I just used made one in a cake round and the other in a metal pie plate. They fit in the toaster oven that way so I saved a little energy and didn't heat the house up.

This is what one of them looked like before baking. I added thyme and pepper. 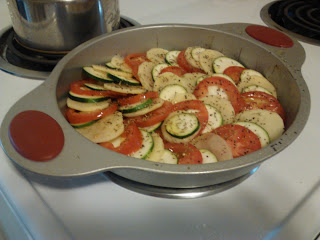 This one I made for the omnivores and they wanted a little Parmesan sprinkled on top. 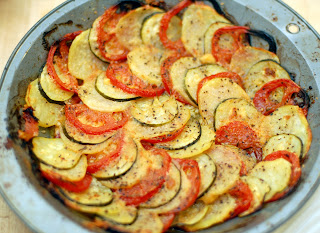 This is one is the vegan one. The recipe calls for the foil to be taken off and at that point, I added some Panko bread crumbs that I sprinkled a little olive oil over. 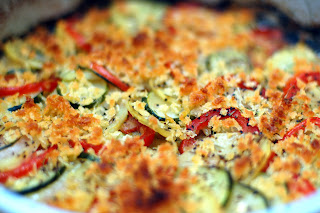 The vegan one turned out so nice that the boys ended up sampling mine. After that, they didn't even care about the Parmesan and said I could leave it off next time. WIN! That night I served it with some breaded tofu, crescent roll (yeah, I know, I was being lazy) and some saffron rice. 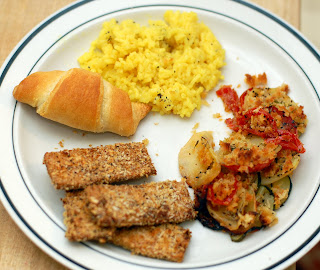