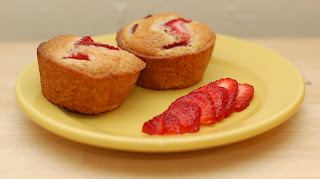 I bought a ton of strawberries two weeks ago. Four pounds. They've been holding up incredibly well. I've been snacking on them, eating them with breakfast cereal and slicing them up for my son any time he wants a snack. This weekend I made some muffins using my regular blueberry muffin recipe with some adaptations. I was able to cut the sugar quite a bit and probably could have cut even more if I'd given these just a tiny sprinkle of powdered sugar afterward. Something about that tiny bit hitting your tongue is really deceptive. Works for brownies, too. I posted the recipe to my work site. I think they'll make a pretty good breakfast or snack for the wee tots.


I knew today that I really needed to use up the last of the strawberries. None of them were bad, but a few were definitely on the soft side and once they're at that point it's a pretty fast descent into moldy slime. I pulled a few aside for another batch of muffins I'm going to send with my son to his math meeting on Friday... 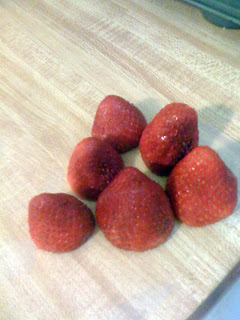 Then I decided to make some pancakes and strawberry syrup. I've never made my own syrup before and it seems pretty silly now that I think about it. I have a kid who is allergic to corn and ever since we discovered that, maple syrup has been wrecking my budget. No more Mrs. Butterworth's around here. Some things are a blessing in disguise, if you want to look at them that way, though. Not that I'd ever wish a corn allergy on anyone, but hey. Those corn syrup concoctions can't compare. At any rate, why on Earth didn't I just make my own syrup?

I looked at a bunch of recipes and found it's pretty much just like making simple syrup + simmering down the fruit. So, I cut up what was left of my berries and put them over medium heat. I added about half a cup of sugar and half a cup of water and just let them go for about 15 minutes or so, until the syrup was almost the consistency I wanted (I figure it will thicken up when it cools). Then I squeezed the juice of about half a lemon into it and ran it through a sieve. 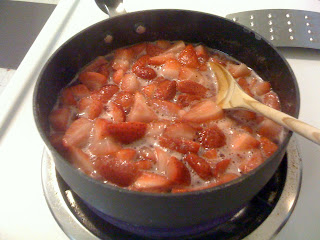 It made about a cup when all was said and done. 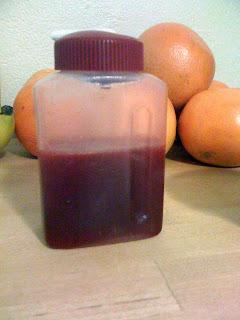 I was going to use it on pancakes, but then I got a hankering for waffles. I'd already made the pancake batter when this urge struck me, however, so I ran and Googled how to convert a pancake recipe to a waffle recipe and the consensus seemed to be that I should just add a little bit more liquid and a little bit more oil. Except in a few places where people were just aghast that you would even try such a thing. Don't you know that you can only get the crispy outside / airy inside waffle from incorporating whipped egg whites into the batter? FOOLS!

I'll tell you who the fools are. I went and added just a little more oil and soy milk to that batter and they were the best waffles I've made yet with nary an egg in sight. 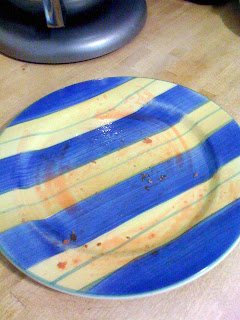 I wish I'd taken a picture of the finished product, but my son scarfed his down while I was making mine and then I was scarfing mine down while making the rest of the batch so all you can see is how clean the plates were afterward.

Here's the recipe, by the way: