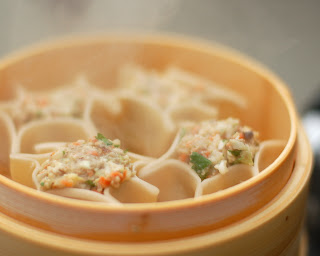 I used to go to these Thai buffets and they would always have these dumplings that were open on top, not like pot stickers. The filling was always a little more dense and I liked that texture. I realize now that a lot of that texture was either shrimp or pork. I've made pot stickers before, but it's a little intense. I have an overstuffing problem that leads to a folding issue that contributes to my sealing deficiency.

I have certain New York Times video content (food and tech stuff) delivered to my TiVo box, and one day Mark Bittman was making shrimp shu mai and the skies opened up and angels rejoiced. I didn't even realize my dumplings had a special name. (Here's the video, but it's meaty, so don't watch if you don't like to see meat). I think the revelation was just the folding part which is rather like pinching on opposite sides rather than actually trying to seal the thing.

Then I went and looked at 10 trillion images (now that I knew what I was looking for) and found the crinkled up, open dumplings I loved. I set out to make them vegan, which really wasn't that hard. It also wasn't that precise. (Sorry.)

I used pre-made wrappers which I had on hand anyway for making vegan pot stickers. I find mine at Central Market in the freezer section. Be careful because a lot of wrappers have egg in them and many recipes call for egg. The Nasoya ones in the fridge section next to the tofu all have egg in them. You don't need it though (of course) and there's a basic recipe here that's just flour, salt and water (for the dough part) that will work fine. That's all that is in the ones I buy (which are these). You'll need to thaw them before using.

To make the stuffing, I just started throwing stuff I had on hand into the food processor. Celery, cilantro, mushrooms, carrots, green onions, firm tofu, garlic. Then I plopped some down on a wrapper and pinched the opposite sides together, did it again another two times until I had 6 folds on the edges. I put them in my new baby steamer (birthday present from boyfriend since the big honking steamer is sometimes a bit cumbersome — THANKS!) and steamed for about 8-10 minutes maybe. 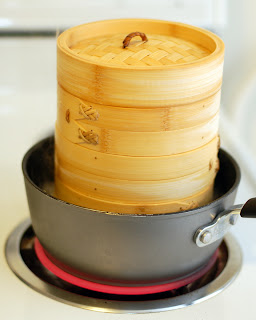 Then, and I know this is not typical procedure, I fried the bottoms of them for a minute in some hot oil. I know they're not pot stickers, but part of what I wanted was the taste and the ease of shu mai but some of the crunch of a pot sticker. Feel free to skip this part entirely and they're just as good. 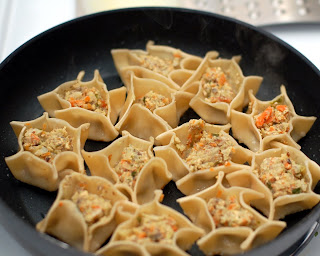 I made a dipping sauce of tamari, dry sherry, grated ginger, sesame oil and lime juice. 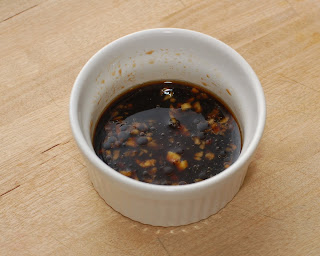 They were really good. We demolished them in no time flat with nothing but nom nom heard all around the table. I think the filling was still a little bit loose and light, though. I think that next time, I'm going to pulverize some glutinous rice or find some glutinous rice flour and add a little of that to the filling mix and steam the dumplings until the rice is done in order to duplicate that dense, stick-together texture that was present in the dumplings I remember from my past life.
asian food veganizing recipes