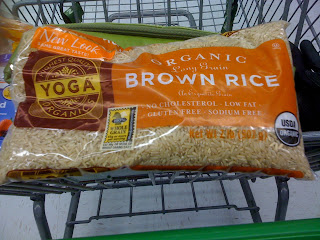 Well, technically it's only week #1 for me, but I'm late to the party as usual. The rest of the group has been blogging about their food budgeting adventures all year. Check them out at the end of this entry...

Mostly this first couple of weeks are going to seem super awesome and easy. We had a first-of-the-year plan to see if we could subsist off just what we have stockpiled in the pantry plus fresh veggies. After almost a month of that, somehow I still have food! I'm going to go ahead and say I'm on week 5 since I've hardly spent a dime all year on food until now.

And I've got extras planned for various breakfasts, snacks and lunches (I have all the ingredients for this stuff so don't have to buy anything new except fruit):

Dark Chocolate Almond Milk -- I haven't bought any all year so thought, "What the hell?" It's supposed to get down to 7 degrees with a wind chill of -5 this week so I see hot cocoa in my future. Total treat, I have to admit.

Egg-free pasta ribbons -- Jacob loves these things and I can't find them everywhere. They're just like egg noodles except no eggs. Only H-E-B, Wal-Mart and Kroger have them and they aren't always in stock, so when I see them, I grab a bag. They disappear around here.

Organic brown rice -- holy crap it was 2 pounds for $3. I never see it that cheap (much less organic!) so grabbed it knowing I'd put it to good use.

Beans, collards, corn meal -- We had some last week and though it's not on the "official" menu this week, it's likely that I'll still make it. That corn bread was soooo damn good.

Pepsi Throwback -- It was the last case and as I was walking out the door, Jacob said he wanted some kind of soda. Boyfriend sometimes takes one to work if I don't get up and make coffee. I may drink one on pizza night but that's the only time I really find I want one. Again, total treat. The check out guy had never had one before so I gave him one. Treat for him, too. Ha.

Habanero salsa is going to be the base of my pizza instead of tomato sauce, I decided, so even though it wasn't on my list, it is going to be part of an actual planned meal. I've been wanting to try Daiya cheese for a while and was going to send boyfriend to Whole Foods to get me some, but when I saw they were carrying this salsa now (one of my favorites) I decided that it would be cheaper to buy this and use it as my topping rather than the cheese. Next time, Daiya. Next time.

Boca Chik'n -- this is an addiction that I must break. They're so fast and easy but man, I do not think they are that good for me. I have no idea about the GMO status and need to research that at the very least. Still, I sort of feel like, at this stage in the game, it's keeping me from doing that compulsive, random, monthly McNugget run that I was doing when I was trying to just cut meat out. They're that damn similar. Why do I love crap so much?

What I'm glad I bought last week that didn't count this week:

Speaking of crap... I bought $31 worth of Nissin's Top Ramen oriental flavor. It's vegan. I can't find it anywhere around here so had to order it from Meijer. The shipping was such that I had to buy 3 cases of it in order to make it cost effective. It was also a relation with a solution of (3, 31). (That was for my kid who is currently studying that stuff in algebra. Ha.)

What I'm thinking, though, is that since he loves the ramen so much, I can justify the purchase by having him eat "my" kind and not buying meat flavored kinds any more. Oh. Snap.

I stayed within my $75 budget and only spent $60.08 on groceries this week. THAT'S GREAT! (Yeah, I'm yelling!) However, if I'd kept from splurging on things that weren't on the list or in the plan, I would have saved another $23.40 for a total spent of $36.68. I had some padding this time, but those splurges will add up once my Costco-induced buffer is gone.


This entry is part of Project: Food Budget. Check out how the entire crew is doing: