Mine's Vegan, Yours Is Not 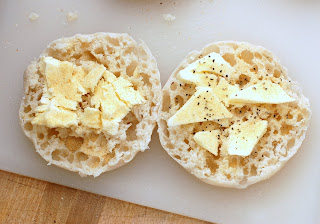 Here's a tip when you're living in a house with an omnivore. Sometimes he wants butter on something and I'm having Earth Balance. Hard to tell apart when I'm making garlic bread or toast or something in the toaster oven. Sometimes he doctors his leftovers up with Parmesan cheese or something. So, what I do is make them visually different in some way so I know which is the vegan version.

I may do this by adding pepper to mine and not to his, or adding a lot of sriracha sauce to his, for instance. If our cheeses look the same, I may use mustard or something to actually draw a V on the bread. Over the holidays, when I made tortellini, I added a lot of pepper to the dough to distinguish it from the meaty version in freezer bags that was for the rest of the family.

I used this trick a lot in the beginning, because there was a lot of doctoring of dishes going on with the meat-eaters. I'm happy to say that now everyone in the house is completely off butter and on Earth Balance instead. Part of this was needing to use up all the butter (Costco!), part of it was me being stingy with the Earth Balance because it's so expensive (now Walmart and H-E-B both have it under $3) and part of it was that they were not sure if they could adjust to the taste. All those obstacles have been overcome and now cheese and sour cream are the only things that they sometimes add to things I've cooked.