Be Good to Each Other (including the veganish others) 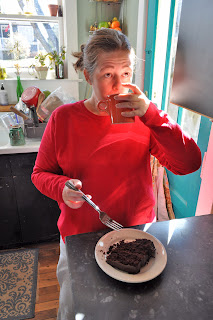 I like it when people are nice to me. I like it when people support my efforts, even when those people are not vegan themselves. Nice people make vegan cake for you at Christmas. They do not tell you what a loser you are or make you feel guilty for clinging to the last of your Coffeemate. Nice people worry about what you're going to eat even before they've looked at their own menu, even though you have told them a million times not to worry about it and that you can handle it. Boyfriend.

I'm seeing a lot of people blogging about going vegan after Oprah's show (follow along here + here). I didn't get to see the show except in snippets on the Web site thanks to the weather situation around here in Texas last week. The parts I did see were all right. I see that they had a Cargill person (meat extreme) and Kathy Freston (vegan extreme) and Michael Pollan (middle of the road), so there was equal representation I guess. I don't think that's what it would have taken to inspire or motivate me to go vegan although I did about pass out during the slaughterhouse video. Why I even clicked that I don't know.

I'm also seeing some reactions that fall into the extremes as well. Lots of ag bloggers and farmers are pissed or frustrated or don't feel they're getting fair air time. Small farmers feel like they are being piled in with big factory farming and don't think it's fair. Hard core meat eaters are hating on vegans as usual. Militant vegans are fighting right back, of course.

What I always think is ugly, though, is when vegans hate on those who are, with every good intention, trying to eliminate meat from their diet. I know that vegan is this special word and people think it's going to get all diluted. They're right. I get it. I can see fighting to maintain its accuracy, sure. (Remind me to write about the "vegan" dinner I had a couple of weeks ago, prepared with the best intentions but not with vegan ingredients.) I'm not saying give up on that or throw your hands up in the air and say, "Fuck it. Honey for everyone. Wool socks for all! Milk on Tuesdays. You can all still be vegan." But at the same time, come on. Be nice.

Everyone has to start somewhere. I think that vegans ridiculing or outwardly showing agitation toward those who aspire to be vegan, who are working on it, who are trying, is not that different than say, when omnivores mock vegans. Like the reaction here or others that I'm seeing. Basically part of the message there is, you can't be perfect, so why even bother? You'll never get it just right and so you'll always be a hypocrite. Just give up and eat meat because your efforts don't matter unless they are 100 percent flawless. That's a very poor message to send to each other and doesn't really accomplish the goals of most vegans, I'd think. Unless the goal is to maintain brand purity rather than decrease animal death and suffering? Maybe I'm confused about the goals or which ones are most important?

I can't agree with the Cargill representative who was on the show that eating meat is the natural order of things, etc., but at least she said that she wouldn't ridicule someone who is trying to be vegan. In the end, this way of life is a choice, so why another person would want to make that choice harder for another is difficult for me to understand and it seems that it has every possibility of causing the very type of suffering they're trying to prevent.

And you know, there's always someone around the bend who can make you or your efforts come up short if you want to engage in a pissing match. Even this show, for example, can make a person feel small if you think about it. When you hear the line about how a vegan saves 100 animals in their lifetime think about how many weeks that is for the average vegan. Now think about how many people will go vegan for just one week as a result of her show. Her "veganish" efforts probably just topped and surpassed the average vegan's efforts over an entire lifetime. Groups are popping up all over the place. In one week, those folks are going to do what it takes the average vegan a year and a half to do. Does that mean you should just give up and eat bacon every day? No. Of course not. Does that mean that you don't want those people to give up meat, dairy and eggs for a week (some perhaps longer, some perhaps forever)? I certainly hope that's not your goal.

And holy tofu-filled cannelloni. All those people who are JUST cutting out meat one day per week on Meatless Mondays. Count up all those days... Do you want them to go meatless the rest of the days of the week? Well, of course you do. But want in one hand...

It's a very large spectrum out there when it comes to ethics and food and just when you think you're at one end of it, you might be surprised to find that you're not even close.

So, I say... Be nice, people. Slow and steady wins the race. Be the change you want to see in the world. Rome was not won in a day. Baby steps! Give credit where credit is due. If you don't have anything nice to say, shut your trap, Debbie Downer. It's not like flipping a switch for most people. Some people take a while to come around and those people do not need ridicule, they need encouragement.

If you really want to further your cause, then you should go out, right this minute and find someone who is trying this thing and help them out. Send them your favorite recipe. Give them your best tip. Give them a pat on the back. Tell them that if they need help or have a question that you can be there for them. Be there on day 7, ready to gently motivate someone toward one more day or one more week. Really. Say, thanks for stopping by, I wish you'd stay longer. Say, if you're leaving, I really hope you come back again. Say, if you're just sticking your toes in, don't be scared to jump in the rest of the way. We don't bite.

On Being Vegan(ish)
soapbox the journey