Okay, there's a lot of pictures here, sorry. Or not? Tortellini is this process that seems a lot more complicated than it is. Once you know all the steps, however, it's not that difficult. Well, if you have the right tools, anyway. If you don't have a stand mixer or a bread machine for making the dough and a pasta roller, it's more work, for sure. But still, it can be done and it's worth it.

I've never made tortellini before, but I've eaten the processed versions (both dried, refrigerated and frozen) and have had them filled with just cheese, with meat or with just veggies like mushrooms. I'd never had them in soup until having Christmas with my boyfriend's Italian family. They usually make them sometime just after Thanksgiving and everyone gets together and helps put out batch after batch. They make them with different types of pork (prosciutto, ham, sometimes salami, pork roast) all ground together and then mixed with a metric ton of Parmesan cheese and about 10 trillion eggs. The dough is also totally eggapalooza. Then they freeze them and boil them in a chicken broth with shredded chicken on the side that people can add. More Parm, of course. Here's what those look like: 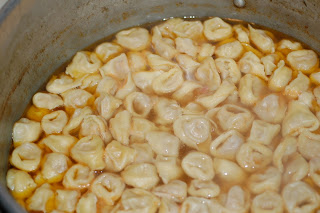 I never got a chance to learn how to make them because if we visit at Thanksgiving, we leave before they start making them. This year, they didn't make them until later, so I got to learn the process. It was a lot of fun, even though I was up to my eyeballs in meaty bits. Of course, being on the newly side of vegan, I wasn't totally flipping my shit. In fact, it was an excellent chance to test my resolve. Because it's not like those tortellini are something I hated. They are something I always looked forward to prior to becoming vegan.

This year they were something I sort of dreaded, however. Everyone was asking me, "Are you going to eat the tortellinis?" As if they were something just completely beyond being able to resist. Or as if they were something that surely, just once a year, I could make an exception for. And I did contemplate the issue long and hard. There was some tug. These things leave a memory in your mouth that's hard to erase. So, in the end, that's why I decided I had to figure out how to make them vegan.

First, I had to figure out the dough. All the pasta I eat without eggs is just semolina, so I figured I'd start there. That led us on a quest all over the place (it's a small town) but we finally tracked down the lone bag anywhere around at a natural food store. They were about to close when I called them, but they set it aside for me. And boy was I glad I went to that place. They had this kala namak salt I've been looking for (for tofu scrambles and other egg-like things) and I found it there in bulk. Been looking all over the Fort Worth area and nada zip zero goose egg. I fly across the country to a town with population of like 10,000 people and there it is. Go figure.

But I digress. I started with semolina from old Bob. 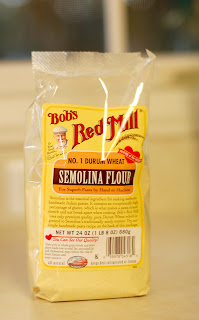 The rest of the dough is pretty simple. I used a 1:1 ratio of all purpose flour to semolina flour. A cup of each yielded me about a pound of pasta which made two trays of tortellini. I used a stand mixer loaded up with the flours, 1/2 teaspoon of salt and a ton of pepper (because I wanted a peppered, speckled dough to differentiate the vegan batch in the freezer and because, well, I'm a pepperholic). To that I added 5 teaspoons of olive oil and I started out with 2/3 cup of water on speed 2. The dough was still dry when it started coming together so I added a couple more tablespoons of water.

Once the dough came together and was a little shiny, I took it out and shaped it into a disk that I quartered. Resting is important or your dough will just shrink and be difficult to work with. I let it relax, covered with a cozy moist towel, for about half an hour before I started rolling it out. 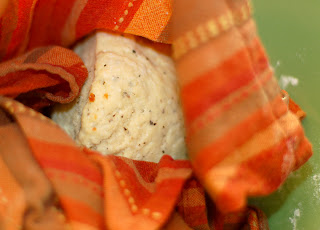 Then I had to figure out the filling. First I was doing a veg filling. It just consisted of onions, garlic, carrots and mushrooms chopped fine and sauteed until everything was soft. 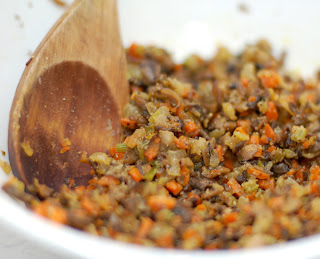 Then boyfriend suggested that I try fake meats. We were laughing about it at first, but then as we started running down the line-up of what was in the other torts, we realized we'd seen every fake meat required on our many recent shopping trips. So we got Smart Deli Baked Ham, Smart Deli Pepperoni, Smart Bacon and Field Roast Italian Sausage. Here they are: 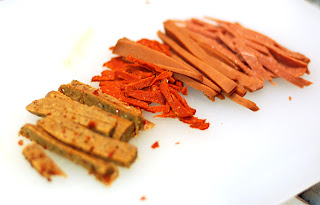 I chopped them up pretty fine. I didn't really want to see what would happen if I ran them through the meat grinder. 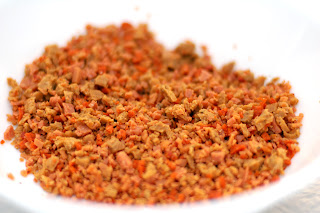 Then I decided I needed something to replicate the Parmesan cheese. Before leaving home, I'd bought some fake Parmesan, but it required refrigeration so I didn't bring it on the plane (even though I did take a bring a few food items from home that I thought would be hard to find). In hindsight, I'm glad I didn't take that stuff because when I got home and put it on some pasta, I thought I was going to hurl.

I'd read somewhere about making ricotta with silken tofu and adding lemon juice to give it that tartness. I wish I could remember where. (I think it was in Vegan with a Vengeance.) I was basically just winging it here. I mashed the two up with a fork and a smidge of olive oil. 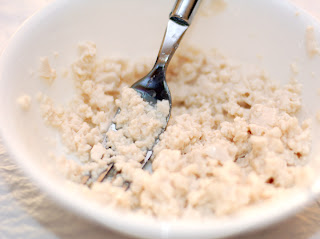 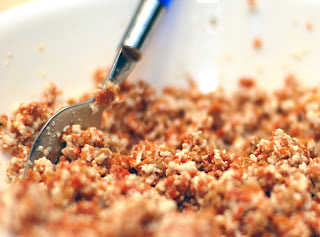 I didn't take pictures of the rolling process since my photographer (boyfriend) was helping me with that part. Basically, you run it through a couple of times on the first setting and keep running it through, moving it down a notch each time, until you get to a 5 or 6. The dough will tell you what to do here. You don't want it to be so thin it's going to fall apart, but you don't want it so thick that it's like eating tires. Once you have the dough rolled out, lay it flat on a very lightly floured tablecloth or an old, clean sheet.

Then it's time to cut the dough. On your standard pasta roller, you'll get a sheet out that can be cut right down the center of the whole length and then cut across to make squares. About 1 inch by 1 inch or larger than that if you're me and like your tortellini more like tortelloni (fat). 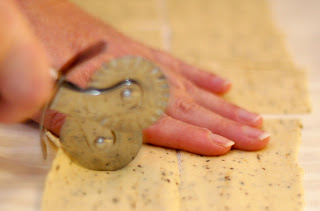 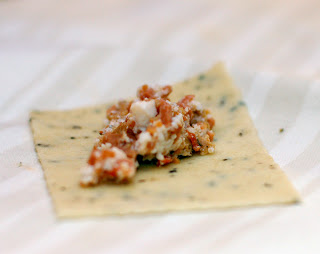 The first fold is to put two opposing corners together (making a triangle) and then press the edges down around the filling. 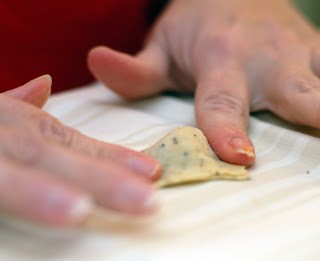 Then you pick it up in both your hands and pinch the corners together a bit and fold it over and twist it around your finger. You have to mash the ends so that it closes the loop and they don't come apart when they cook.

Even though I learned from the most decorated Italian women, I still managed to warp the folding process somehow and make it all my own. I don't think it was such a bad thing, because I actually removed one of the steps by wrapping the dough around my finger as I pinched and then mashing it with my middle finger, which was the finger that turned out closest to where the loop was closing. Efficiency!! I was a tortellini making machine! 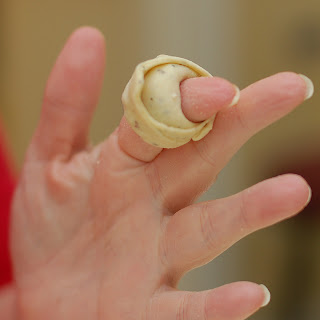 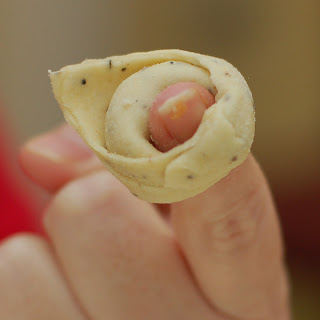 When you get one folded, you put it on a cookie sheet lined with parchment or waxed paper. Then you freeze them and when they're hard, you can store them in a baggie or other container. If you try to do that before they're hard, you'll get a big gummy rock of tortellinis glued together. If you're going to eat them right away, I think you can just put them on parchment or a towel to dry a bit and toss them right in the broth or boil and serve some sauce over them. 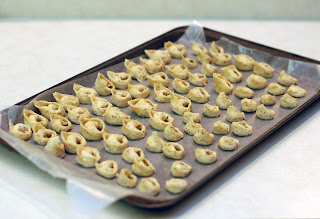 The broth I made was from Wolfgang Puck's organic vegetable stock. I added a couple of chopped carrots, some seasonings, a can of diced tomatoes and then boiled that until the carrots were tender and added the frozen tortellini and boiled for... I'm not even sure how long. I just kind of eyeballed it. Like the omni version, you'll eat them until you're just in terrible pain. But it's a good pain. And you'll wish you could eat just one more. 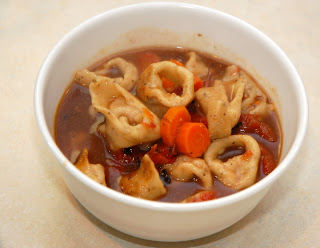