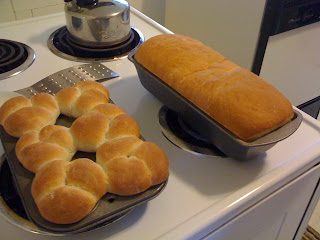 Coming into this, I have to say that I'm a bit of a food hoarder. Not like the kind that requires an intervention or comes with the 1-800-got-junk truck parked outside, but I do like to keep my pantry stocked, I shop at Costco so small things come in big packages, and the bulk bin is, like, totally my BFF! Needless to say, I have some things already on hand that will make this challenge easier. (At least in the beginning.)

On the other hand, I'm feeding 3 mouths (one of those is a teen-aged boy mouth) + any guest mouths that may come to visit. So sticking to $75 a week for me might be a bit more of a challenge than for someone with less mouths. Broken down, it's about $10.75 a day to feed three people three meals a day + beverages and snacks. $3.60 a meal... Surely I can do that.

Another consideration is that those two other mouths of mine also eat dairy and very occasionally meat or fish. For example, once in a while Jacob wants a can of chili or some meat flavored ramen. Sometimes my boyfriend likes to get breaded fish at Costco for fish tacos. Boyfriend uses milk in his coffee. They both like dairy sour cream and cheese.

Those animal things are expensive.

I am slowly wearing them down, though. I am leading by example. My son is finding that he likes a lot of the foods I cook without meat, even vegan chili, so that's probably just something I need to work on at the grocery store level when he's wanting it. I can just say, "Hey, I'll make vegan chili if you don't get this."

I am well aware that they are my dollars and I can just put my foot down and say, "Look, Bucko, you're not getting this can of chili, no way, no how." But he's 15 and in a few years, he's going to be making all these decisions on his own. I feel like I need to give him the chance to start experimenting with them now rather than me being a dictator. I would love nothing more for him to choose to be vegan for the rest of his life, but that's got to be his decision and not my mandate. Eating like this is a decision. Every single meal it is. I want him to choose for himself so that he knows that the resolve is his own.

It's always in the back of my mind, too, that once he gets a job, he can buy his own chili and I will make him do just that.

Boyfriend is also a big boy and can buy anything he wants so I don't go all militant when it comes to fish and milk and cheese. If anything, he was eating better than me for quite a while before I finally gave up the meat. I was caving a lot more often eating out while he was steady getting black bean tacos and making other meatless choices. Going vegan was kind of like quitting smoking. I really had to be ready.

Now, a lot of what either of them eat is just a matter of what I'll cook and what I won't. I have put my foot down about raw meat. I don't want it in here. I'm not cooking it, for sure, but it's also just been the most beautiful thing not worrying about meat cross contamination, etc. It's been nice not worrying about mayo spoilage. It's been nice doing dishes by hand and not thinking about some little salmonella or E. coli bits lingering about. It's been nice using a single knife and cutting board for an entire meal's prep.

I was still cooking with a little dairy or eggs at the beginning of vegan time even though I wasn't eating it. A friend came over to learn to cook some things and he's not vegan, so I used eggs in the recipe. In just that little bit of time (from Thanksgiving to now) all the rest of those eggs still sit in the fridge for I don't know what. My kid's allergic to them and I don't want to cook them any more.

I was also sometimes taking my portion of vegan something out and setting it aside, like stroganoff gravy and then stirring in some sour cream at the end for their portions. But I'm not doing that any more either. If you want sour cream, add it yourself.

I do influence them, though, so hopefully choosing not to add those things for them will have far-reaching effects. I made some tacos this week and they were so incredibly good. Spicy rice, black beans, fried potatoes, tons of guacamole, homemade salsa, Marie Sharp's, warm pliable tortillas. But, oops. We're all out of cheese. I even called boyfriend and told him that I was making tacos and that if he wanted cheese he could stop at a grocery store on the way home. It wasn't a deal-breaker. He didn't stop and he ate them enthusiastically.

This entry is part of Project: Food Budget. Check out how the rest of the crew is doing: