My Version of the Grit's Mid-E Platter

January 09, 2011
Today, I spent some time making food that others have been making for a long, long time. It felt pretty good even though I had the convenience of canned chickpeas and falafel mix and I didn't have to crack my own wheat. Everything else was otherwise fresh and there's something soothing and hypnotic about dicing veggies and juicing lemons.

I made my own version of The Grit's Mid-E Platter. Here's theirs that boyfriend had last month when we made a stop there: 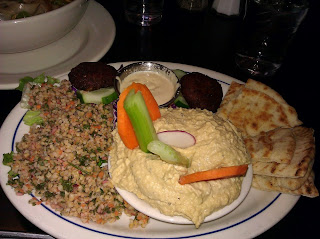 And here is my version, made today: 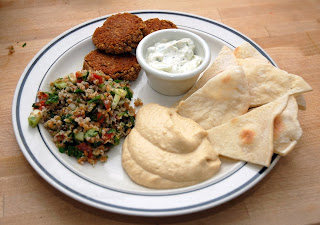 I made the falafel with this mix from Near East. Mix with water, let it sit for 10 minutes and make patties and fry or bake. I bake due to the sad, depressing lack of a vent hood in my kitchen. When it comes to wet vs. dry and firm vs. soft falafels, I'm on the side of soft and wet. These are somewhere in the middle, though, and that's all right, too.

I made the tabouli by soaking a cup of bulgur wheat in a cup of boiling water for an hour and then adding a shit ton of lemon juice, some olive oil, one bunch of parsley chopped like mad, 4 romas and a small onion diced teeny. I put salt (never enough according to boyfriend, I'm a chronic undersalter) and pepper in there, too. Just before serving I added about half a cucumber, diced.

I made the hummus with a can of chickpeas, another shit ton of lemon juice, salt, 7 cloves of garlic sauteed ever so gently in about 3 tablespoons of olive oil (which I added in, too) and some tahini... enough of the canned juice to make it the light, loose consistency I like.

I made pitas with a recipe from my colleague Saad Fayed: How to Make Pita Bread and the video here. I've never made pitas before (even though I've been a PITA most of my life) and I did several things wrong. Dough was too wet. I tried doing it on the dough cycle in my bread machine without checking to see if it was balling up when it started to knead. It's a super wet day and my house is much more humid than usual so I had pita dough soup when it was done kneading in the machine. Then I hand-kneaded a bunch more flour in and probably should have let it rest again, but didn't. Then I was cooking them for 4 minutes on one side and 2 minutes on the other, but I should have been doing 3 minutes and 1 minute instead. Also, once you've got the pieces pinched off, just roll without any kind of folding or disturbance of any kind. The less disturbed the dough was after dividing, the better. In fact, those were the only ones that actually puffed up.

I made some tzatziki sauce out of equal parts vegenaise and soy yogurt plus a little vinegar, dill, garlic powder, salt and pepper and cucumber stirred in at the end. This is kind of like ranch dip also. I'm amazed at the combination of dill and garlic and how ranchy it is. I never realized those were the two tastes I was getting off that stuff all my life. I just thought it was magic. The best part about this was (and I will talk more about it later) that I made the yogurt myself. I drained it so it was more like sour cream, really... FUN! I had no idea yogurt was so easy to make. Or cheap!

The best part about making all this is that the leftovers are spectacular. All those flavors just brew and get even better.
copycat recipes middle eastern food the grit