Ate at the Grit Today 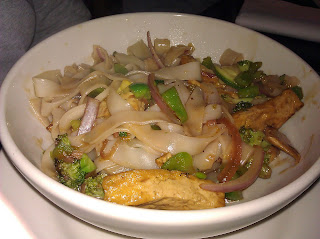 It's been a while since I've written, but I'm proud to say that I haven't fallen off the vegan wagon. In fact, I've got so many pictures of vegan creations, meals out and whatnot that I hardly know where to start.

I'll start small, though, and just say that I am in Athens, Georgia, and ate tonight at The Grit. It was really refreshing to be somewhere where there were so many vegan options. It's not a totally vegan spot, but it's damn sure vegan enough to give me some relief.

I've been on the road for almost two weeks now and away from my own kitchen, so there has been a lot of improvisation. It hasn't been too bad and folks have been super nice, inquisitive and accommodating even when they didn't have to be at all, but still it's never easy when you're away from your own pantry.

Anyway, I had the noodle bowl which was pretty good. I should have gotten the mid-E plate, because I took a bite of boyfriend's falafel and I could have eaten a whole plate of those. Kiddo got the mondo burrito, which is funny, since I make these from their cookbook all the time at home and then boyfriend's sister and her hub split a golden bowl.

The best thing about the meal was really less what I ate and more what I *could* have eaten. Just having choices is comforting. Vegan banh mi, vegan curry, etc. and of course, just people who know what vegan even is takes a little bit of the pressure off.

And bonus, when we got back to the house, boyfriend's sister made the chocolate vegan death cake from the Grit cookbook and I ate a huge slice of that! It was incredible!
the grit vegan restaurant options