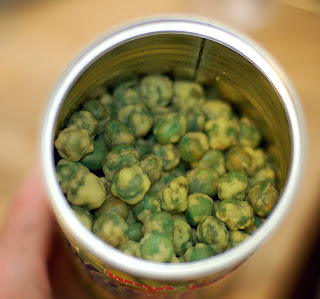 So, being new to all this means that every day is about discovery. What I'm loving about being part of VeganMoFo — and just veganism on the Internet in general — is how everyone shares so damn much. Incredible recipes, pro tips, product finds, letters from corporations, cooking failures and successes, personal experiences eating out... You name it. They share it. There is no secret society of mean girls that I've discovered thus far and folks are, indeed, being as kind to me as they are to furry, four-legged creatures.

As a result, I'm finding out about lots of new things, so I'm going to try and make this a regular feature here... where I run down some of the things I didn't know before or things I've found around my town (which is Fort Worth, Texas) that are vegan or vegan-friendly.

These wasabi peas from Hapi are vegan. Also, they are corn-free which means allergic kiddo can eat them. Which is good, because he adores the things. I don't necessarily adore them but since the can is sitting out on the counter, I find that I am munching on them more often than not. Boyfriend (who is a consummate pea hater) thinks they taste like magic marker. But he still eats them, too. 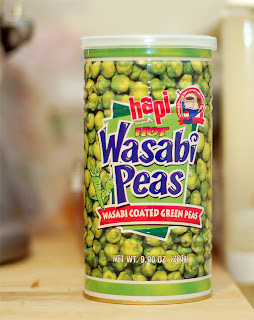 This week I also learned about RiceMellow Creme. Again, this is not something that matters so much for me, but for my kid who loves marshmallows and hasn't had one in all the years since he found out he was allergic to corn. This stuff is corn-free, unlike the regular versions or even the vegan versions. I haven't figured out where to get it locally yet, but I'm working on it. It's kind of expensive to get online because it really should be shipped cold. At least in Texas. I mean, I know it's going to freeze a few nights this week, but it's also going to be 70 during the days. Sitting on my sunny porch at 70 means RiceMellow Soup.

I also learned about Soy Whip and Rice Whip. Yeah. In a can or in a box that you can whip yourself. I'm hoping that when I hit Whole Foods tomorrow I can find some. Fingers crossed. That would round out my holiday meal quite nicely.

I found that Amazon.com is a pretty good spot to get vital wheat gluten. Even cheaper than what I've found around stores and bins here in town. The Arrowhead Mills case of 12 boxes works out great for me and 1 box is about a week's worth (or 4 nights) of seitan at a cost of about $3 per week.

Walmart
Yeah. That place. For the last six or so years, boyfriend and I have been in various stages of avoiding that place. I think in the last two years, especially, we may have stepped in there just a couple of times. It's not just on principle, either, but because the few that are around our house are just horrible places to be. Overcrowded, dirty, stressful, bleck. But being vegan can be expensive, especially when you're newly like me and you want to try out all the wacky bits like fake meat and convenience foods. Don't get me wrong, it doesn't have to be expensive at all. I mean, if I was doing this up right I could do it very cheaply. I could probably do it cheaper still but it wouldn't be as gorgeous or have as much variety as Melody's most awesome food.

So, I went this week, and since it's been a long time since I shopped there in earnest, I decided to really look around. What I found was actually a lot of stuff that's vegan. An entire section of vegetarian freezer foods and this wasn't even at the big Walmart, it was at the smaller, neighborhood version. Stuff I found:

So, I hate to sing the praises of that place, but it's kind of nice to find stuff like that at a savings. And it makes me think of the scale of it... that if they're selling this stuff in such volume and they're selling it enough to stock it in CowMeatVille, Texas, at the neighborhood market, then hopefully that means that there's less demand for animal products or that they are reducing the suffering at least a little. It makes me hopeful that it's a reflection of what consumers are really wanting and the action they are really taking. Now if only they could reduce the suffering of their employees — females especially — that would be something.

I watched them make a copycat recipe of Hostess Cupcakes on Cook's Country recently. That had my mouth watering. I love those things. I think they were exclusively the "500 extra calories a day" that my poor child got while I was breastfeeding. Of course, the way they made them was in no way vegan at all, so I thought I was going to have to do all the work of veganizing them. Oh, but no. Synchronicity, come on down. You're the next contestant... I'm flipping through my birthday gift, Vegan with a Vengeance, and what do I find but a recipe for Faustess Cupcakes on page 229. YES!

Other Milks: Soy milk is for baking. Almond milk is for pleasure. Rice milk is for tea and cooking. Cow's milk, you are dead to me. Seriously, though, aside from being unable to find a good, heavy duty creamer for coffee, I'm done even missing cow's milk.1 Rice milk has been a surprising star of my kitchen lately. I love it in tea. LOVE IT. It gave my mashed potatoes and sweet potato casserole just a little something special that I can't even describe. It was perfect in my cereal. Costco has a case of the stuff and I will be buying it next time I'm there.

Boca Original Vegan Burgers. We used to be able to get these by the case at Costco, but no more. Boyfriend used to cook them up all the time in the skillet. I always thought they tasted burnt, though, and usually opted out of those meals. He liked them because it was easy to make when I said it was a "fend for yourself" night. He's made them in the microwave before, too, and that really grosses me out. Then they're soggy. I've made other soy meat analogues in the toaster oven and I've been craving a burgery type thing, so I got some Bocas and decided to put them in the toaster oven instead. And they turned out PERFECT. Juicy and not overly done on the outside. So my pro tip there is: Toaster oven for Bocas!(15 minutes at 350 with a spray of oil on the pan.)


1 I'm using the last of the pre-vegan purchased, milk-containing CoffeeMate just so it doesn't get wasted (nobody else in the house will use it) and when it's gone I'm officially done with coffee until something miraculous comes along in the way of a truly vegan creamer. It may end up going to waste anyway since my stomach is back to not liking coffee much. I've been sticking with tea + rice milk this last week and my body is so much happier for it.