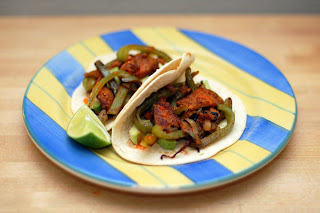 My motto lately is, "Don't make it too hard on yourself." I'm finding that there's a sort of balance that I have to strike in order to stay true. There's a certain amount of excitement I have for tasting new things and trying to cook with ingredients I'm not familiar with. But on days when I'm tired (which there have been an awful lot of since my surgery) or days when I'm busy, that excitement level wanes. When those times hit, it's important for me to stick with what I know.

For me, that means finding meat analogues or just cooking meals that used to have meat as an accent like tacos, fajitas, burritos, stroganoff, pot pies and stir fries. It's so much easier to replicate or just omit tiny pieces of meat instead of trying to duplicate a meal where meat was the star. So, fried chicken or pot roast? Not on those days!

I was at a wedding last month where they had fajitas. The meat and veggies were cooked separately and kept in separate containers, so it was really easy to just throw the veg component in the tortilla and doctor it up with salsa and guacamole. I've never used squash in a fajita, but this had some in there and I found I really liked it. I don't cook with squash near enough, but after reading lots of vegan blogs, I know it's going to be something I do a lot in the near future. Vegans are seriously competent with all manner of squashes.

Making the full batch of seitan provided me with enough "meat" to last more than a week. I even sent a packet home with a vegetarian friend to feed her four family members. So, on a busy night last week — after physical therapy even — I chopped up some onions and peppers and sauteed those in a little oil and sprinkled it with vegan taco seasoning (watch out, not all are) and then tossed the seitan in for a couple of minutes, toasted a tortilla and there was dinner. 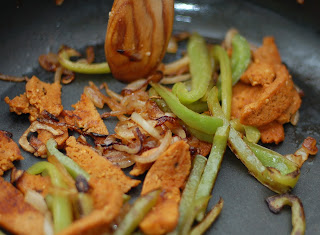 I liked the seitan in it okay and the carnivores really liked it being there. Still, I almost think I would have liked it better with just the veggies. I coupled fajitas with, of course, a beer. Beer is something I never even considered questioning previously even in my vegetarian life. I don't know why. But lately everything is suspect to me. Sure enough, I find that many beers are not vegan including my favorite, Guinness. (Here's why.) So, I checked out another of my faves, Shiner Bock, and found that all of their beers except for the Hefeweizen are vegan. It's made in Texas, so it's local, too.

Brian of One Crabby Vegan tweeted some good advice my way when I complained about Guinness: "Yeah I just learned that one too. Stay German and you're good :-)" Shiner Bock is indeed made the German way. Good to know for when I'm out and about or have already imbibed a little and my decision-making skills are compromised. I can handle, "Bring me something German!" 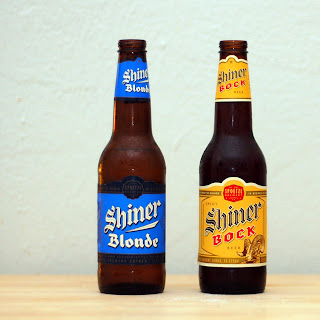