November 22, 2010
Leave it to me to get sick during a blog-a-thon about food. I've been eating a whole lot of nothing for about the last week. But it's all been vegan nothing, so that's OK.

Luckily, I'd gone to the store just moments before my first sniffle. I bought some quick-fix things so my sweet, loving boyfriend was able to help whip me up some food when I was feeling like eating. Which brings me to this scary stuff: Gardein Chick'n Scallopini. 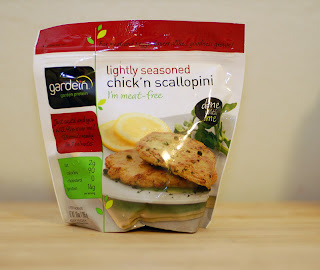 Seriously. It's expensive, though. $4.79 for 10 ounces / 4 portions. Each portion has 90 calories, 2 grams of fat and 14 grams of protein. It just takes a few minutes of reheating. It took longer to make the potatoes and veggies. Which were made thusly, btw:


Roasted Veggies: Clean, fresh green beans + chopped yellow squash + chopped carrots + garlic powder + black pepper. Toss all that in a little canola oil. Spread on a flat pan and bake at 400 degrees for about 20 minutes. Salt to taste after removing from oven. 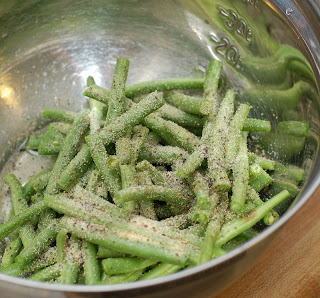 Mashed potatoes: Steam 1-inch chunks of potatoes for 15-20 minutes till tender. Mash with rice milk and Earth Balance. Add salt and pepper to taste. I like the taste of rice milk in potatoes better than cow's milk. Very cool. 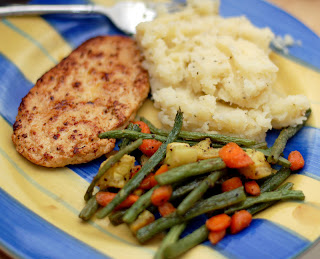 So the verdict is, I like this stuff. It's probably too expensive for me to eat very often, but I can see me eating this once a week or just keeping in the freezer for those times when we're busy or I don't feel like cooking. I can see myself making chick'n piccata with these for a special dinner. That was always one of my favorite things to get when eating Italian out and I do miss it. Plus, it's something everyone likes so it's a dinner where we're all united. And I love having those whenever I can.